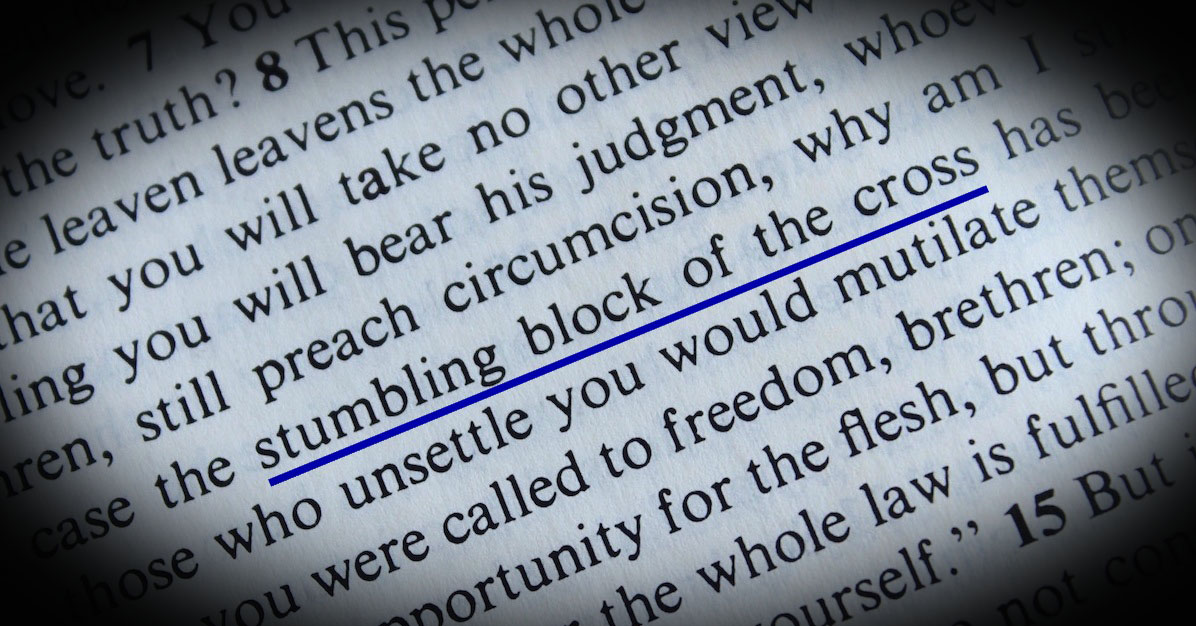 Romans 9:30–33 (ESV) (30) What shall we say, then? That Gentiles who did not pursue righteousness have attained it, that is, a righteousness that is by faith; (31) but that Israel who pursued a law that would lead to righteousness did not succeed in reaching that law. (32) Why? Because they did not pursue it by faith, but as if it were based on works. They have stumbled over the stumbling stone, (33) as it is written, “Behold, I am laying in Zion a stone of stumbling, and a rock of offense; and whoever believes in him will not be put to shame.”

In case you hadn’t heard, the gospel is offensive.

1 Peter 2:7–8 (ESV) (7) So the honor is for you who believe, but for those who do not believe, “The stone that the builders rejected has become the cornerstone,” (8) and “A stone of stumbling, and a rock of offense.” They stumble because they disobey the word, as they were destined to do.

That bad news? You are a disobedient criminal (sinner, wicked, corrupt, pick whatever synonym you want) by nature and by choice.  Wanna hear worse news?  Payment for your crimes is demanded and will come due.

Can it get even worse?

Consider this … that payment that is due is made throughout eternity, with no chance of parole. No bail. No visitation.

There is no reduced sentence for good behavior.

And lest you think it’s “just them”, this prison sentence isn’t just for Joe who thinks he’s a woman, Sue who married her girlfriend, Jim who he beat his wife, or Bob who’s a creeper, it’s all encompassing – the gospel leaves no room for “acceptable” rebellion …

Romans 3:10–19 (ESV) (10) as it is written: “None is righteous, no, not one; (11) no one understands; no one seeks for God. (12) All have turned aside; together they have become worthless; no one does good, not even one.” (13) “Their throat is an open grave; they use their tongues to deceive.” “The venom of asps is under their lips.” (14) “Their mouth is full of curses and bitterness.” (15) “Their feet are swift to shed blood; (16) in their paths are ruin and misery, (17) and the way of peace they have not known.” (18) “There is no fear of God before their eyes.” (19) Now we know that whatever the law says it speaks to those who are under the law, so that every mouth may be stopped, and the whole world may be held accountable to God.

Notice carefully what Paul says it is that causes of all of this – not that “Joe thinks he’s a woman” or “Sue married her girlfriend” or “Jim beat his wife” or “Bob looks at women lustfully.”

Far from it!  By quoting Isaiah, Paul says that the reason everyone has “become worthless” is not the individual ways in which sin manifests itself in our lives, it’s this:

“All have turned aside.”

Yeah … that was hatred.  Calling it something else to make yourself feel better about your rebellion doesn’t change what it is or was.

Rebellion.  God is your king regardless of whether or not we acknowledge it.

And we replaced Him with anything else because “Ain’t nobody telling me what I can and can’t do!”

And that rebellion, no matter how it plays out in our lives, is worthy of death.  Which leaves us with only two options (that is, if we don’t want the death penalty):

And here is why the gospel is good news.

The good news, though it starts off with a death sentence, ends with the hope of freedom! That the death sentence that we all deserve was already carried out, on a cross, 2000 years ago, on a hill outside of Jerusalem.  Executed by the only righteous judge in the entire universe, against the only person in the entire universe whose humanity demonstrated that he deserved life – someone who willingly chose to take the bullet for his enemies.

Romans 5:6–11 (ESV) (6) For while we were still weak, at the right time Christ died for the ungodly. (7) For one will scarcely die for a righteous person—though perhaps for a good person one would dare even to die— (8) but God shows his love for us in that while we were still sinners, Christ died for us. (9) Since, therefore, we have now been justified by his blood, much more shall we be saved by him from the wrath of God. (10) For if while we were enemies we were reconciled to God by the death of his Son, much more, now that we are reconciled, shall we be saved by his life. (11) More than that, we also rejoice in God through our Lord Jesus Christ, through whom we have now received reconciliation.

Acts 4:8–12 (ESV) (8) Then Peter, filled with the Holy Spirit, said to them, “Rulers of the people and elders, (9) if we are being examined today concerning a good deed done to a crippled man, by what means this man has been healed, (10) let it be known to all of you and to all the people of Israel that by the name of Jesus Christ of Nazareth, whom you crucified, whom God raised from the dead—by him this man is standing before you well. (11) This Jesus is the stone that was rejected by you, the builders, which has become the cornerstone. (12) And there is salvation in no one else, for there is no other name under heaven given among men by which we must be saved.”

And yet, even in that great news, there is offense…

John 14:1–7 (ESV) (1) “Let not your hearts be troubled. Believe in God; believe also in me. (2) In my Father’s house are many rooms. If it were not so, would I have told you that I go to prepare a place for you? (3) And if I go and prepare a place for you, I will come again and will take you to myself, that where I am you may be also. (4) And you know the way to where I am going.” (5) Thomas said to him, “Lord, we do not know where you are going. How can we know the way?” (6) Jesus said to him, “I am the way, and the truth, and the life. No one comes to the Father except through me. (7) If you had known me, you would have known my Father also. From now on you do know him and have seen him.”

The “no one” that Jesus is referring to is literally “no one.”  Not one person in existence.  Not one person who has ever lived, is currently living, or who will live from now until the end of time.  Not you, not me, not anybody in the history of forever has any hope throughout forever except through faith in Jesus.

Could it be that some of the best news of the gospel is perhaps the most offensive thing about it?  That you can do nothing to earn grace, nothing to deserve a pardon.  You can’t “out-good” your bad.  You can’t work off your sentence.

And perhaps the saddest thing is that we try so hard.  Only to fail so miserably.  It never ends well when we try to do Jesus’ job for Him.

And oh how we try.

Remember Paul’s admonition?  Remember the condemnation he proclaimed?  That we have all turned away from God?

Now hear the hope – turn away from yourself and trust in Jesus as your only hope of pardon, as your only escape from the eternal prison that awaits you, and set your eyes on this…

Revelation 21:1–5 (ESV) (1) Then I saw a new heaven and a new earth, for the first heaven and the first earth had passed away, and the sea was no more. (2) And I saw the holy city, new Jerusalem, coming down out of heaven from God, prepared as a bride adorned for her husband. (3) And I heard a loud voice from the throne saying, “Behold, the dwelling place of God is with man. He will dwell with them, and they will be his people, and God himself will be with them as their God. (4) He will wipe away every tear from their eyes, and death shall be no more, neither shall there be mourning, nor crying, nor pain anymore, for the former things have passed away.” (5) And he who was seated on the throne said, “Behold, I am making all things new.” Also he said, “Write this down, for these words are trustworthy and true.”

He is powerful to make all things new.