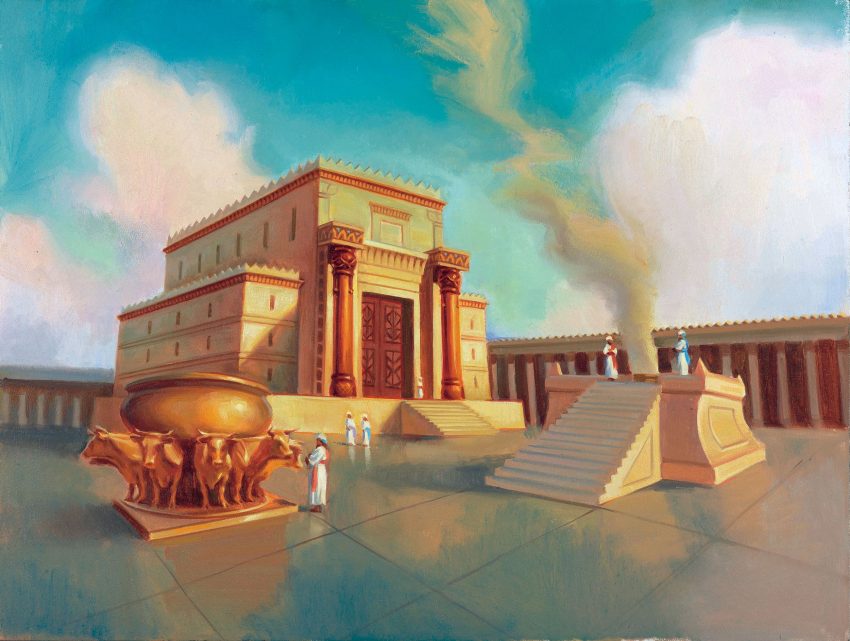 In The Bible Recap reading plan, we are in a section of jumping between Proverbs, 1 Kings, and 1 Chronicles and something really stuck out to me in the section in 1 Kings 8 where Solomon is dedicating the temple – it’s one of the things that we would do well to remember.

In this section of his prayer of dedication, Solomon is asking God to remember His promise to His people and to forgive them if they turn from their sin and repent. That’s a great thing to remember, but there’s more under the hood here that might be missed.

Here is an example:

1 Kings 8:46–53(‎‎46‎‎)“If they sin against you—for there is no one who does not sin—and you are angry with them and give them to an enemy, so that they are carried away captive to the land of the enemy, far off or near, (‎‎47‎‎)yet if they turn their heart in the land to which they have been carried captive, and repent and plead with you in the land of their captors, saying, ‘We have sinned and have acted perversely and wickedly,’ (‎‎48‎‎)if they repent with all their heart and with all their soul in the land of their enemies, who carried them captive, and pray to you toward their land, which you gave to their fathers, the city that you have chosen, and the house that I have built for your name, (‎‎49‎‎)then hear in heaven your dwelling place their prayer and their plea, and maintain their cause (‎‎50‎‎)and forgive your people who have sinned against you, and all their transgressions that they have committed against you, and grant them compassion in the sight of those who carried them captive, that they may have compassion on them (‎‎51‎‎)(for they are your people, and your heritage, which you brought out of Egypt, from the midst of the iron furnace). (‎‎52‎‎)Let your eyes be open to the plea of your servant and to the plea of your people Israel, giving ear to them whenever they call to you. (‎‎53‎‎)For you separated them from among all the peoples of the earth to be your heritage, as you declared through Moses your servant, when you brought our fathers out of Egypt, O Lord God.” (ESV)

There are many parts of 1 Kings 8 that follow this outline:

But in this particular passage, we see some things that may offend our sensibilities, one of which is that the punishment that God enacts is having them carted off as captives of an enemy. Yes, God causes them to be carried away as captives into a foreign country becasue of thier sin.

The next thing we see is a conditional – if they repent, even as they are in a foreign land as captives, God will hear their plea. God is not as distant from them as they are from their country, in fact, God is with them in their captivity!

Next, the statement “maintain their cause” is an extension of the previous passage:

1 Kings 8:44–45(‎‎44‎‎)“If your people go out to battle against their enemy, by whatever way you shall send them, and they pray to the Lord toward the city that you have chosen and the house that I have built for your name, (‎‎45‎‎)then hear in heaven their prayer and their plea, and maintain their cause. (ESV)

If they go out to battle and pray, hear them and maintain their cause. This is describing righteous obedience, going into battle for the Lord as the Lord commands, and praying as they go. That’s the encouragemetn. And if there is an encouragement, there just may be a warning, which leads into our passage.

The warning is for people who go into battle and sin against the Lord such that He sends them into captivity in a foreign land. If they then repent, the request is that God maintain’s their cause in thier captivity.

Which sort of begs the question – was their cause a military victory or was it a different kind of victory?

What kind of cause can be maintianed in captivity?

Remember when Paul wrote Philippians? He wrote it from prison. And he wrote this:

Philippians 1:18–24(‎‎18‎‎)What then? Only that in every way, whether in pretense or in truth, Christ is proclaimed, and in that I rejoice. Yes, and I will rejoice, (‎‎19‎‎)for I know that through your prayers and the help of the Spirit of Jesus Christ this will turn out for my deliverance, (‎‎20‎‎)as it is my eager expectation and hope that I will not be at all ashamed, but that with full courage now as always Christ will be honored in my body, whether by life or by death. (‎‎21‎‎)For to me to live is Christ, and to die is gain. (‎‎22‎‎)If I am to live in the flesh, that means fruitful labor for me. Yet which I shall choose I cannot tell. (‎‎23‎‎)I am hard pressed between the two. My desire is to depart and be with Christ, for that is far better. (‎‎24‎‎)But to remain in the flesh is more necessary on your account. (ESV)

If you know anything about Paul, you know that he saw great opportunity for preaching the gospel as long as he was alive, wherever he was, prionser or free, persecuted or welcomed. That is the kind of cause that can be maintained in captivity – the cause of the kingdom of God that is borne from a love for and obedience to God.

When Solomon says “maintain their cause”, what would their cause be other than honoring God and making Him known? They can’t well enjoy a military victory in captivity!

God is using their captivity to advance His kingdom, and Solomon is saying “God, forgive them of their sin, and maintain Your work of expanding Your kingdom through them, even in captivity.”

And then we see the real blessing, and this is where our sensibilities may be offended a second time. What does Solomon request of God here on behalf of the sinners who repent?

He requests freedom of course!

But not the kind of freedom we would expect – not release from captivity, not a return home, but freedom from sin. Solomon requests that God forgive them!

And finally a reminder of who they are and whose they are – His people Israel who He hears and who He separated from among all the peoples of the earth to be His heritage, whose fathers He brought out of Egypt.

Still, in all of this, Solomon does not ask God to rescue them from their captivity.

Doesn’t that seem odd, that Solomon would not say “God, hear the cries of your people, set them free from their captivity, and bring them home.”

Solomon understands that since God sent them off into captivity that God must be working something in and through their captivity. We see that theme all throughout scripture – Joseph and his brothers, the apostles, the Israelites wandering in the desert, it’s everywhere – God causing His people to be enslaved or taken captive and then using that captivity to advance His kingdom.

It’s a godly humility and submission that we need to receive that well, and we should take note of for today.

Pray your desires for sure, but pray knowing that even if God does not grant you your desire, He is still good and knows what’s best for you and will act for your good, even if that means your captivity.

Romans 8:28(‎‎28‎‎)And we know that for those who love God all things work together for good, for those who are called according to his purpose. (ESV)

God works all things together for your good if you love Him.

And notice all of the other things in 1 Kings 8 where God is not asked to alleviate thier discomfort or suffering or captivity.

1 Kings 8 shows me that God is more concerned with our holiness than our happiness…with our repentance and obedience than with our comfort.

And speaking of comfort, where do you find it?

In the pleasures this world can offer?

Or do you find comfort and rest in the sovereign hand of the One who can lead you to captivity to advance His kingdom?

Where are you looking?